The idea of creating a set turned out to developing a system mechanism, which enables the use of a G2 large capacity refill as well as our system pencil mechanisms DSM 2005, DSM 2006, DSM 2007 and DSM 2008. Consequently the production of pen housings for the actions “twist” and “push button” as well as “sliding cap” is becoming very economical.

The system mechanism is mounted into the upper part of the pen. The front part of the housing can now take a G2 large capacity refill or a system pencil mechanism. Great advantage for the producer: create a writing set including a ballpoint pen and a mechanical pencil within one and the same housing.

Twist mechanisms are equipped with a friction sleeve avoiding an overtwisting of the mechanism. This offers an additional protection for your high-quality writing instrument.

Moving back to its initial position, this mechanism is ideal for non-round writing instruments.

Actuating mechanisms for one-colour mechanisms are available for unlimited purposes: For twisting, pushing or sliding of all refills with ISO or special dimensions. You will find the most suitable actuating mechanism for your ballpoint pen in our programme. We are also specialized in developing special solutions according to your specifications.

Today consumers increasingly expect top quality and innovative writing instruments in an attractive design. Particular attention is obtained by writing instruments which allow to write in various colours or with several writing systems – like a small office. The possibilities offered by such leading edge products match in a special way today’s consumers’ requests.

SCHMIDT Technology is offering mechanisms that meet all consumers’ needs. Ample combinations between ballpoint pens, pencil mechanisms and multicolour ballpoint pens are thinkable. Your customers’ requirements will be accomplished by us in a perfect way.

The manifold advantages of the SCHMIDT® mechanisms are clear:

Push and twist pencils are traditional and at the same time fashionable. Especially in our computer age the fast and erasable pencil stroke is getting increasingly popular. Using a mechanical pencil to make entries in your agenda, taking quick notes during a conversation or making a sketch is most comfortable.

Today, SCHMIDT® push pencil mechanisms are mostly designed and produced according to customers’ requirements. Your special demands and product profiles are always a challenge for us and our ambitious specialists.

SCHMIDT® push pencil mechanisms have proven their quality in many mechanical pencils of many renowned pen manufacturers during decades. 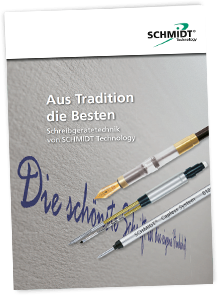 Find out everything about the many possible applications of our writing instruments technology.
download PDF